Croatian rivers except for the Gačka, haven't been mentioned often in international fishing circles. Lately many things have changed and much has been done to give the other rivers the same status as the Gačka, if not a better one, in the area of flyfishing. Because of this it is certainly worthwhile to visit the Croatian coast beauties such as Kupa, Kupica, Curak and Vitunjčica it which trout, grayling and Danube salmon can be caught.

The Curak has its beginnings under a high rock, from a spring called the Green Whirlpool - Zeleni vir ( because of its color). For seven kilometers its whole flow (7km) runs through a beautiful wooded canyon. One part of the canyon is a special geomorphological reserve called Vražji prolaz -Devil's Pass, where there is also a cave called Muževa hiža -The Husband's House. The banks of the Curak stream are covered in dense forest and the stream is very unique. It contains grayling and brown trout. If you enjoy fishing on small streams, the Curak stream will be a real challenge and a memorable experience for you. By purchasing a daily license you can also fish on the Kupa and Kupica. Only fishing with one flyfishing rod and one fly is allowed. Only barbless hooks are allowed. All flyfishing methods are allowed. 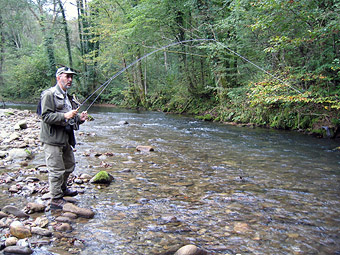 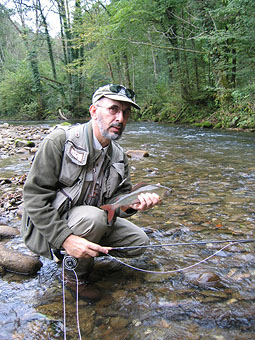 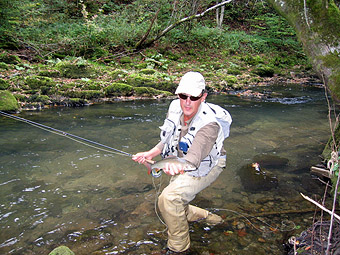 The river Kupa starts  from a limestone  well, which is located within the Risnjak National Park, as is the spring part of the river (7km). In its upper, salmonid part, the Kupa is a typical spring-fed river. More than twenty rivulets and streams join the Kupa in the first 30 kilometers of its flow. This produces a relatively stable water temperature and a mostly favorable water level during the whole fishing season.The Kupa is a real mountain beauty with a greenish color. Its water is clean and crystal-clear. The Kupa flows through a rocky bed in which moss and algae are predominant as far as underwater vegetation is concerned. There are brown trout, grayling and huchen (Danube salmon) in the Kupa.

Fishing is only allowed with one fly-rod and one artificial fly. Use of barbless hooks is mandatory. All fly-fishing methods are allowed, except between April 1 and May 16 when only streamers are allowed.

The whole part of the river Kupa which is maintained by the Sport Fishing Club Goran, from the spot where the river Čabranka joins the river Kupa, downstream to the village of Kavrani. This is a single fishing area. 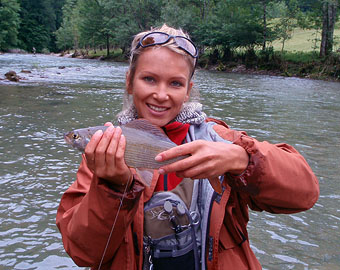 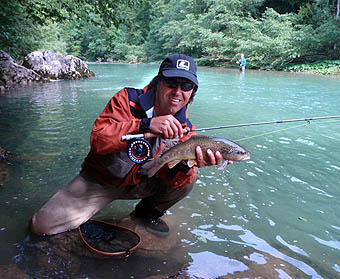 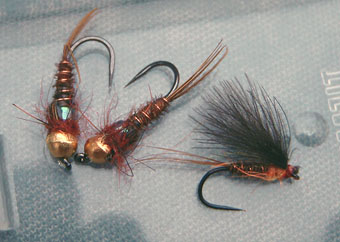 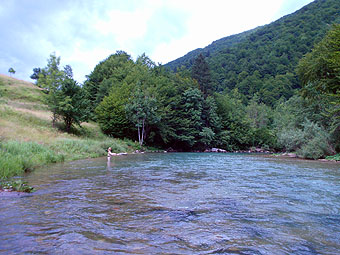 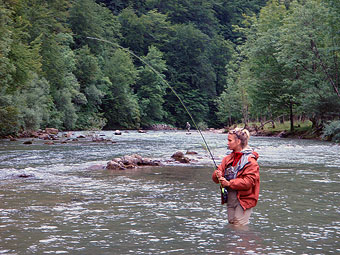 The Kupica is a tributary of the  Kupa River and  is only 3 kilometers long. It is one of the first rivers in Croatia where  the "catch and release" principle has been fully implemented. Its banks are covered with greenery and its excellent fishing is a lure for any passionate angler. You can find an abundance of grayling and brown trout in it. These are known for their remarkable toughness and strength, which makes catching them such a special fishing delight. You are allowed to fish with one fly-rod and one artificial fly. Use of barbless hooks is mandatory. All flyfishing methods are allowed. 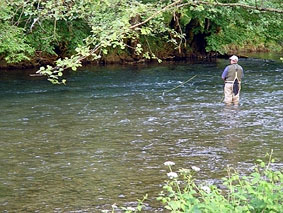 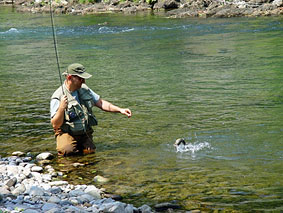 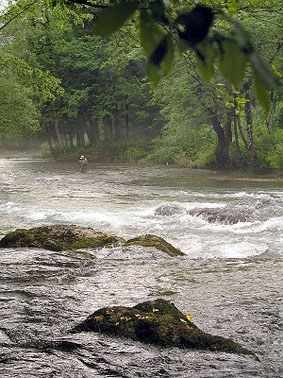 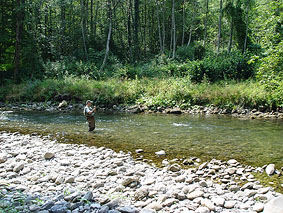 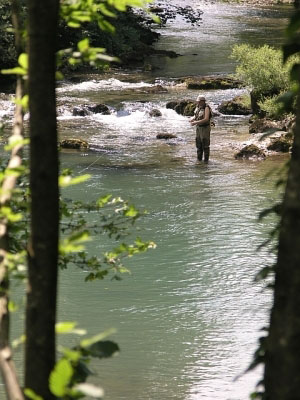 The Gačka River is one of the most sought after destinations and most renowned trout waters in Europe and the world. It takes you an hour and a half to get there by car from Zagreb. Gačka is a gulf river which, for 11 kilometres, gently  winds down the Gačka valley plain from its spring in the southeast,  to the gulf in the northwest. The Gačka is a typical chalk-stream. It is exceptionally rich in flora and fauna. The vegetation is abundant because of  the favorable water temperature, convenient chemical composition, silty river bed, and moderate flow. Underwater vegetation grows throughout the year, but more intensively in the warm seasons. Twenty-five plant species have been identified, from algae and bryophytes to woody plants.

As far as the fish species are concerned, the Gačka is famous worldwide for its brown trout. As well as brown and rainbow trout, there is also grayling in the Gačka, and  some other fish species. Brown trout in the Gačka grow five times faster than in other limestone rivers, because of the stable water temperatures, plenty of oxygen and the water's mildly alkaline chemical composition. The secret of the Gačka lies in all the fauna that abounds in it. We know of 17 aquatic animal communities, i.e. organisms spread throughout the river's entire course, constituting the basic nourishment for the brown trout, and  to which it owes its unusually rapid growth.

A/ From the spring of the Gačka to Stanišić Bridge (the fifth concrete bridge) fishing is allowed only with an artificial fly. From the bridge named Podgora (the first bridge) upstream to the mouth of Sinačka pučina in the river Gačka, only  catch and release is permitted.

B/ From the Stanišić Bridge (the fifth concrete bridge) downstream, fishing is allowed with an artificial fly and all other artificial baits.

C/ On the lakes Švica and Gusić you can also fish with natural baits, while observing all fishing regulations. 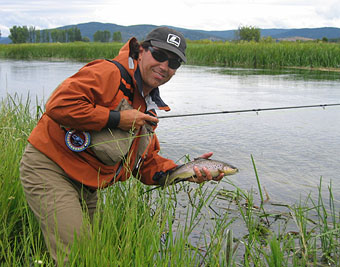 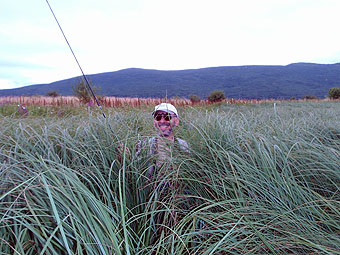 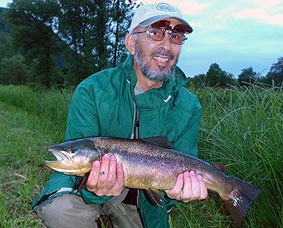 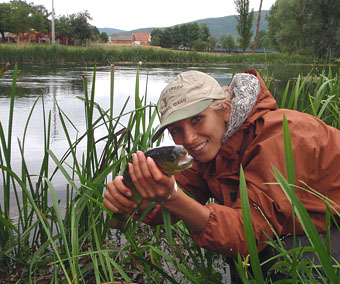 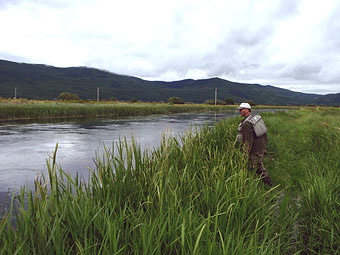 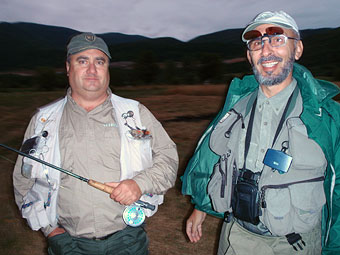 The Vitunjčica is a small river that flows from beneath  the Klek mountain and continues into Dobra after 4 kilometers. Its whole course is situated in a beautiful natural environment consisting of meadows, fields and forests, all dominated by the Klek, the cradle of Croatian mountain-climbing. The water abounds in brown and rainbow trout, as well as golden trout, and in the lower part near the delta there is also grayling to be found.

Fishing is only allowed with one fly-rod and one artificial fly, streamers and glo bugs are not allowed. Use of barbless hooks is mandatory. 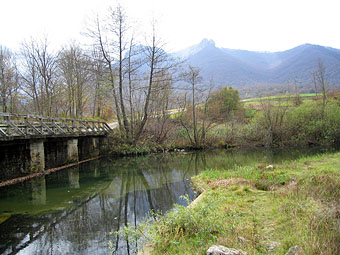 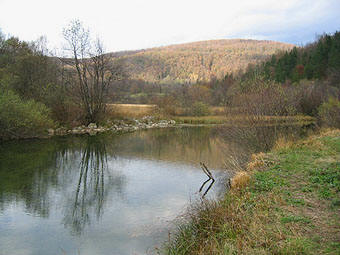 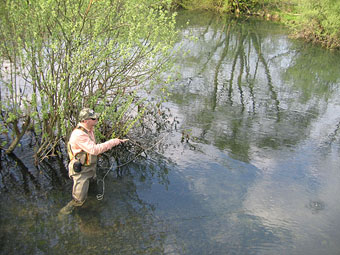 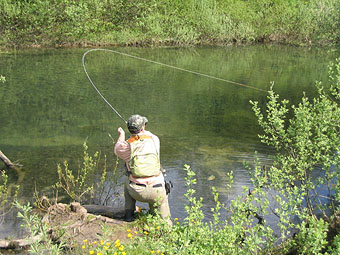 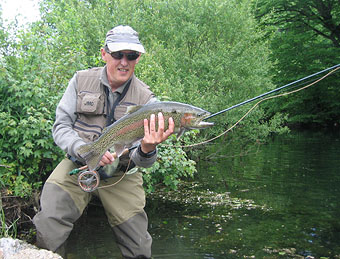 The information on croation rivers was provided by Milan Kupresanin. Thanks a lot Milan for joining us fishing some of the beautiful Croatian waters!