pike on fly
Fly Fishing for Pike in Latvia

Engure Lake seen from the plane moments before landing in Riga 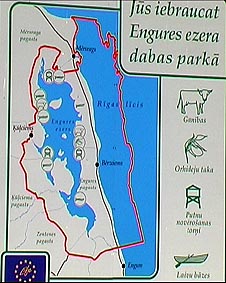 Engures Lake is Latvias longest lake and is located west of Riga near the mouth of the Lielupe. It was once connected with the sea but when the glaciers went back the lake remained in short distance of the coast. A connection to the sea in form of a cannel was dug last century to dry the swamps. The project was successful and the level of the lake went down one meter.  Now the lake is shallow, indeed it is the shallowest lake I have ever fished. And if I mean shallow this does not mean 1-2m of depth. No! On low water level appr. 1,5 m is the maximum depth of the lake and only a tiny part of the huge lake has got that much depth. And even at these deeper places most of the ground is covered by weeds and other water plants. It is really hard to believe that in this lake fish can survive the winter under ice.

The fly of your choice

I like to fish this water with my "GF pike's favourite", a fly of the flipper/tailor series which I created about 8 years ago. It works best in cristal clear water with roach and rudd present. Engures is such a lake. Reinis on the contrary likes to fish Engures with a white bunny with a red dear hair head. In Engures the weeds are always a problem and if you want to cast to the places where the pikes hide a weed protector is a must. 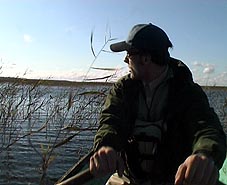 The only possibility to fish Engures Lake effectively is from a boat. There are five boat launches around the lake but it is not allowed to bring a boat with you and ... no motors are allowed on the lake. The whole lake is a ornithology reservoir with many rare birds and even wild horses live along the banks. This makes fishing an experience because it is very quiet. You only hear the splashing of hunting pikes, the sound of the birds which behave really calm except o

ne of the twelve resident white-tailed eagles(Haliaeetus albicilla) is hunting for them. In the open water the pikes are hard too find, but along the reeds and rushes you will soon recognize them. Nearly every minute you will see a pike splashing into the millions of bait fish along the shore line of Engures Lake. Most of the time you will see small ones up to 1,5 kg, but from time to time pike up to 5 kg show up. Of course it is not too easy to get the really big ones. The reeds, rushes and weeds are often some kind of a problem.

casting right into the rushes

Where the vegetation is a little bit more

open(best is if you can find spots with a low density of rushes) you cast straight inbetween them and pull in your streamer unregularly. Sometimes surface patterns, like Reinis deer hair bunny or Dahlberg divers, are attacked with an explosive splash. The patterns that are fished a bit below the surface fish in my opinion even better, but of course the attacks are not that spectacular. It's up to you what you like more. In my opinion the deerhair patterns are a good choice for big pike that have just started feeding especially when the flies are presented hard with a heavy splash on the surface so that the pike can easily locate them. 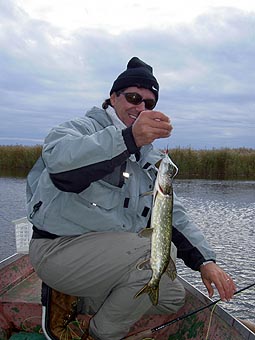 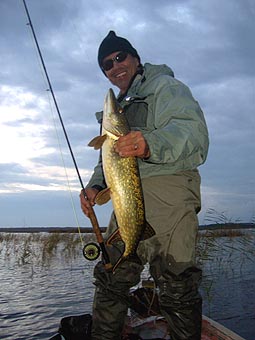 Getting the better ones

With no doubt the best chance to get one of the better pikes is to fish where deeper spots meet the shallows. There you will always have the possibility to run into a good one. And there are really huge pikes in the lake. The largest last season(2003) was 16 kg and when the lake was fished with nets last spring for getting pike eggs, a pike that was said to be 25 kg plus broke the net and escaped. At least this is what the people from the fishery research center told...

My Latvian friend Reinis Rutkis, besides Egils Collenkopfs the only EFFA (former FFF-Europe) flycasting instructor in Latvia, knows the lake very well, but the lake is far too large to know all the spots. And even when fishing with him we were touching water he had never fished before. This is the reason why there are still so many pike in the lake, although every year about 5 tons of them are taken home by spin, bait and fly fisherman. Even some commercial fishing is done at the lake(not at the weekends and not in a way central Europeans think of when they hear the word commercial). Only a few little nets can be seen from time to time, very small, old fashioned and most of them designed for cyprinids. So there is not really a lot of preasure on the lake. If there are about 10 rowing boats on this part of the lake near the ornitology station on a weekend, it is a lot.

Thirty and more attacks on your fly per day - not too bad indeed!

So there is space for everyone in the thousands of pockets, around the penninsulas and small islands. This is why fly fishing becomes more and more popular. Although you do not catch big fish as regularly as you do in the "Schärengarten" in Sweden, around the Aland Islands or in the lakes of North America and Alaska it is great fun to fish Engures Lake and on a good day you can expect between 30 and 50 attacks on your fly. Not too bad isn't it?, and because of the shallow water you will more or less always be able to see the pike attacking your fly like a crocodile! 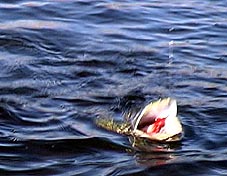 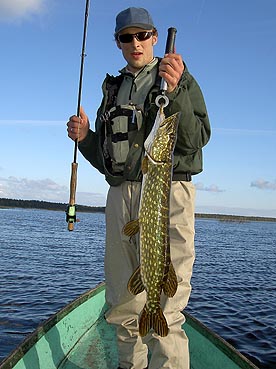 The best time to fish Engures is on a quiet and windless autumn morning when the lake is like a mirror. This happens one of five times you go there. More or less all the times there is slight wind at the lake which is of course not too bad to get a big and more "educated" pike to grab your fly. On the other side the wind cools down the water. So it is good to find some warmer and windless pockets or little bays where the prefered higher temperature is available. Always have a look at the baitfish! The pike are not far from them! When the wind calms down in the evening the pike show another height in activity. And as I said before you will never know what attacks your fly as long as two hands of water are below your fly.

So whenever you are in Latvia and you have the chance to fish Engures for some hours - give it a try!