Is it possible to catch a giant Barramundi on command? I mean, can I rely on someone I don‘t know and expect to land a huge barra on fly for sure? Well, I did not know Paul Dolan before he invited me to fish with him, but when talking to him on the phone I was very convinced that my aim to catch a big barra would work out with him. The moon, the weather' just everything was on my side. Well not everything. The target destination was 900 km north near Mackay and - and I had to be back in three days. I decided to do it despite the small time slot and drove these 1800 km for a few hours of evening and night fishing for Barramundi with Paul.

The day started like many good fishing days do. First things went wrong in order to turn to the better later. Pauls car battery exploded just a few hours before my arrival so he was not sure whether he could pull the boat to the lake or not. Paul somehow managed to get the battery exchanged so at least the fishing trip was saved. With a delay of two hours we put the boat to the water and started moving to the other side of the lake. As we came closer Paul noticed that due to the delay his favorite spot was already taken. He was really upset as he saw his plans being baffled. We were already as close as 300m from the spot when the other boat all of a sudden started to leave. „Yes, yes, move, please!“, Paul whispered and his mood changed dramatically as the boat headed towards the other shore. Paul anchored his boat in about 40 m distance from a huge bed of lillies where he thought the barras to hide during the day in order to come out to hunt after sunset. Paul`s favorite fly for Barramundi is very special. He developed it together with a friend. The DK Dancer fly is a floating fly which is fished on a #9 density compensated sinking line. It is twitched very hard followed by small pauses in order to imitate the fast sideways movements of an injured bait fish.

Therefore the eye of the hook does not sit at the tip of the fly but below in about a centimeter distance from the nose of the DK Dancer. This supports the intended movement. It is a great fly that would for sure work for pike-perch in our waters, too.

Before we started to fish Paul switched on the side scan of his echo sounder in order to scan the area. „Without a good echo sounder the fishing would be only half as successful, especially at night!“, he let me know. The reason for that is quite obvious. Although side scan is designed for being used from moving boats, it can be used from an anchored boat, too. You do not know in which direction the fish was swimming, when it was hit by the sonar beam but you know at least the approximate distance and side of the boat. However, you need to be lucky to place your fly at the right spot. If you know that the fish are there it does not matter if you do not know exactly where they are. The important difference is that you will fish far more concentrated. I could easily follow his argument as it corresponds with my opinion on believe and success which can be read in my book. If you know that the fish are there and you believe in your fly this is a more or less 100% guarantee for a catch. In order to get at a nice picture of a good barra before sunset, Paul wanted to go for sure and took the spinning rod. It did not take long and exactly as Paul predicted in regard of the first biting period a big barra took his lure. A few seconds later a massive silver ballion went airborne. A tough fight began but due to Paul’s experience a few minutes later the huge fish could be landed. What a start!

After that is was time for fly rod action and as soon as it got dark the first barra hit the fly. These fighters are increddible! They hit the fly very hard and after you strip strike them they jump. Even the big ones! After I landed my first big barra of 95 cm plus, I immediately understood why the barramundi is the no 1 game fish in Australia. We landed a few fish and some got away. Not too bad for an evening that started late. The smallest barra was about 90 cm(!).

After such increddible fights under a beautiful stary Australian sky it is easy to understand that one can get totally infected by the barramundi fever. I will for sure never forget that night on Kinchant Dam. It was a good decision to take the chance to fish with you. 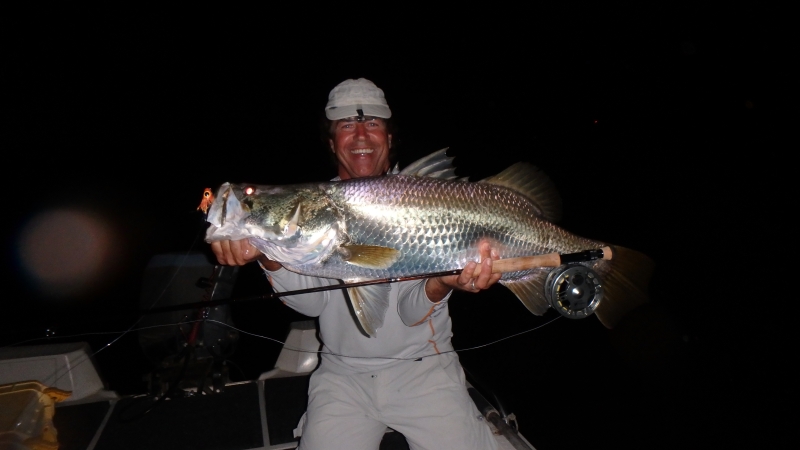 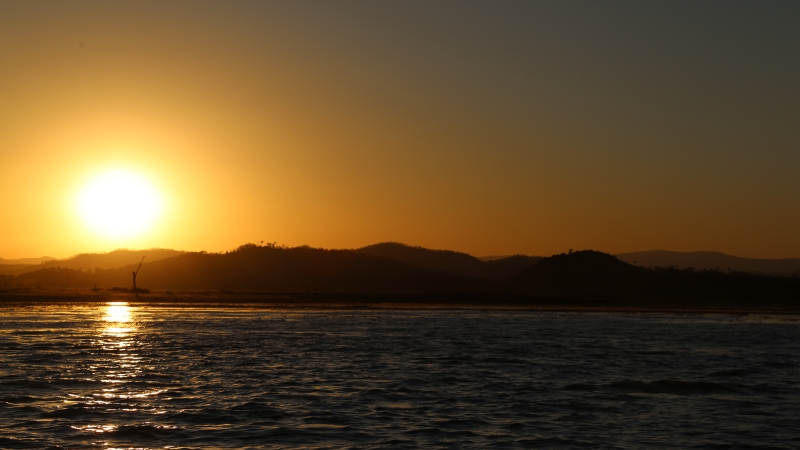 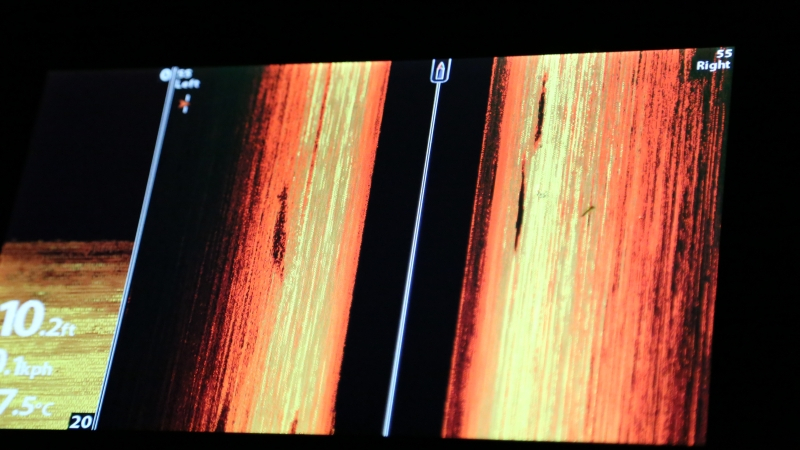 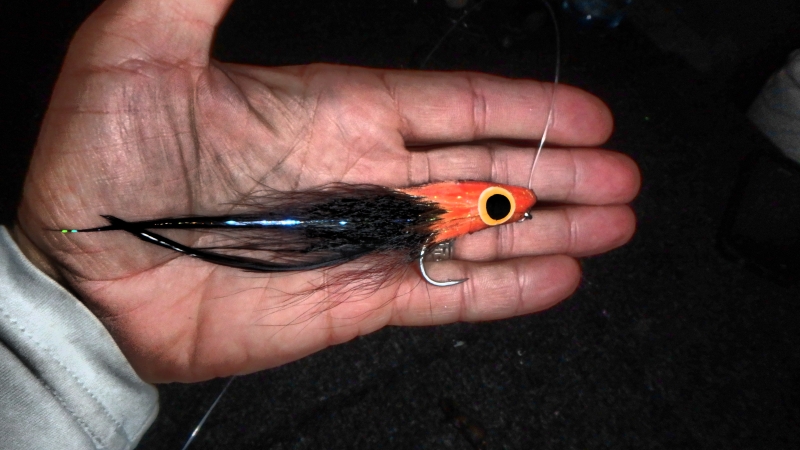 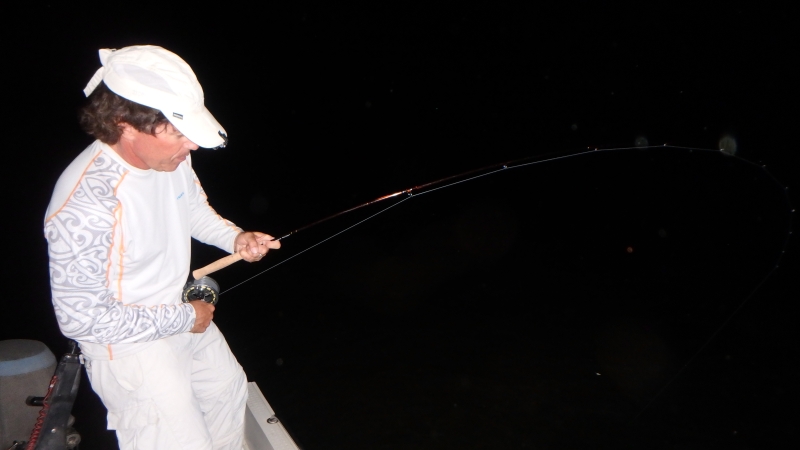 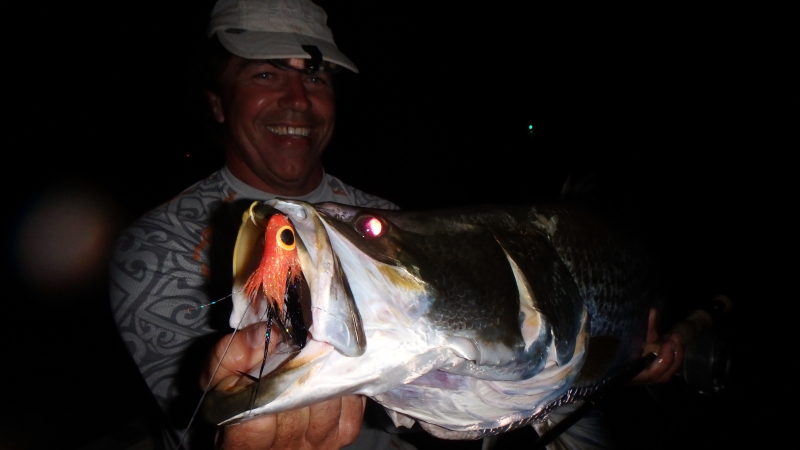 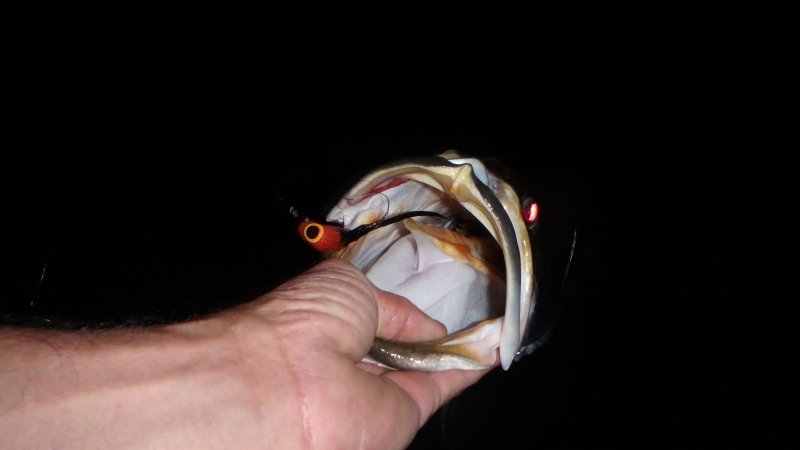 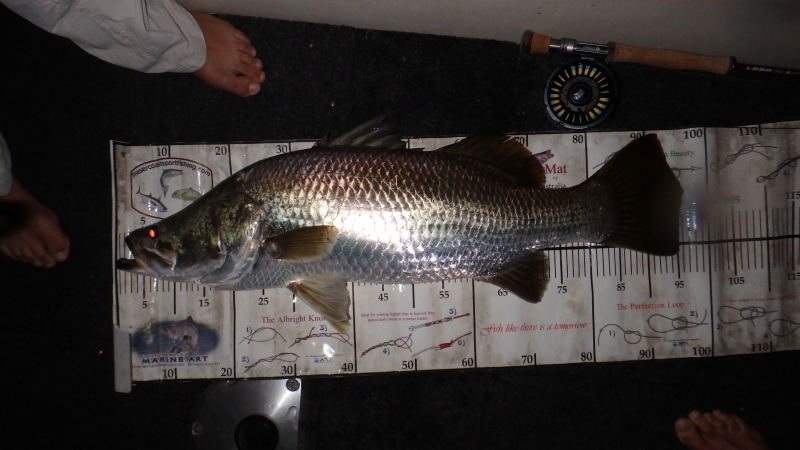